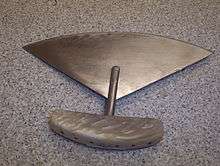 An ulu (Inuktitut syllabics: ᐅᓗ, plural: uluit, English: "woman's knife") is an all-purpose knife traditionally used by Inuit, Yup'ik and Aleut women. It is utilized in applications as diverse as skinning and cleaning animals, cutting a child's hair, cutting food and, if necessary, trimming blocks of snow and ice used to build an igloo.

In the Nunatsiavummiutut dialect, spoken in Nunatsiavut, the word is spelled uluk, and in East Greenlandic it is sakiaq or saakiq and in syllabics is ᓴᒃᑭᖅ.

Traditionally the ulu was made with a caribou antler, muskox horn or walrus ivory handle and slate cutting surface, due to the lack of metal smelting technology in the Arctic. The handle could also be carved from bone, and wood was sometimes used when it was available. In certain areas, such as Ulukhaktok Northwest Territories, copper was used for the cutting surface.

Today the ulu is still often made with a caribou antler handle but the blade is usually made of steel. The steel is quite often obtained by purchasing a hand saw or wood saw and cutting the blade to the correct shape. A hardwood called sisattaq is also used for handles. These uluit are both kept for home use and sold to others. It is also possible to purchase commercially produced uluit, sometimes made with a plastic handle and complete with a cutting board.

Āulu is a Hawaiian name for several species of tree found in mesic forests:

An ulu is an Inuit cutting knife.

Ulu may also refer to: